Dioxins Before Swine – Irish pork is off the menu, according to the BBC.

The UK’s Food Standards Agency is monitoring pork products in the Irish Republic because of fears of contamination with dioxins. “Tests showed some pork products contained up to 200 times more dioxins than the recognised safety limit.” Interestingly, dioxin levels in soil have been declining in recent years, according to another BBC report from 2007. The alert over dioxins followed an alert after PCBs (polychlorinated biphenyls) were reported to have been found in Irish pork on 1st December after samples were taken 19th November.

There is some hint that machine lubricating oils contaminated with PCBs (stable polychlorinated biphenyls) may have degraded to release dioxins which somehow found their way into the pig feed. But, more likely is that non-feed grade oil is being used at some point in the cycle to dry biscuit meal (out of date biscuits and bakery goods from the food industry). Such non-feed oils obviously do not have the same quality controls as extra virgin olive oil and so could very easily have higher than food-safe levels of contaminants, including PCBs and dioxins. This suggestion hints once again, as did the ongoing melamine scandal, at how easy it seems to be for unscrupulous sectors of the food industry to use non-food materials in their products, allegedly.

So, what are dioxins and should we be worried about them? 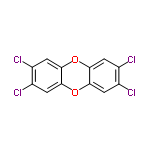 Dioxins are organic compounds formed when a huge range of materials, particularly chlorinated polymers (PVC plastics) burn and in some industrial processes. They are ubiquitous in the environment and became the focus of environmental activism because of their reputation for being among the most toxic compounds known. Colloquially “dioxin” is talked of as if it were a single compound rather than a class of compounds, but the most usual reference is to the chlorine-containing compound 2,3,6,7-tetrachlorodibenzodioxin. Dioxins should not be confused with the compound 1,2-dioxin and 1,4-dioxin, which are heterocyclic, organic, antiaromatic compounds.

2,3,6,7-Tetrachlorodibenzodioxin can have some nasty effects such as irritation to the eyes, allergic dermatitis, chloracne, porphyria; gastrointestinal disturbance, possible reproductive, teratogenic effects, liver, kidney damage, haemorrhage, and occupational carcinogenicity. But, does that long list of problems mean anyone eating any of the food products from Ireland – bacon, ham, sausages, white pudding and pizzas with ham toppings – were or are in any danger. “The UK’s Food Standards Agency said it did not believe at this stage that UK consumers faced any ‘significant risk’,” reports the BBC. Seems like fair comment, only serious chronic exposure to low levels of dioxins or acute high-level exposure are of real concern.

No member of the public has ever died from dioxin poisoning, despite the fact that for several decades industry has been inadvertently releasing these materials into the environment as impurities in hundreds of products and that countless burning materials release the same supposedly deadly compounds across the globe continuously. Occupational exposure has led to probably at most four deaths from industrial accidents involving the release of dioxins, according to John Emsley writing in The Consumer’s Good Chemical Guide.