If the day of the triffids were ever to come, then Heracleum mantegazzianum, would be the henchmen. The giant hogweed, also known as the cartwheel-flower, the giant cow parsnip, hogsbane, or giant cow parsley, is a nasty plant. It is called hogweed because the flowers smell of pigs. But, that is not the worst thing about it. You may have read in the news recently of the crippling effects it had on an unwitting Welsh gardener. His bare legs brushing against the plant developed nasty and deep blisters in the coming days and awful pain. He is apparently still unable to walk because of the damage done by the plant.

The plant, of which Peter Gabriel once sang in the Genesis song “Return of the Giant Hogweed” on the band’s 1971 Nursery Cryme album, is native to the Caucasus region and Central Asia. Victorian botanists brought it to Great Britain as an ornamental plant and it has since spread across Europe, North America, and elsewhere. It is the plant’s sap that causes problems for animals that come into contact with it. The sap contains chemicals known as furocoumarin derivatives. These are present in the leaves, roots, stems, flowers, and seeds of the plant.

Furocoumarins are natural products, organic compounds produced by the plant for various reasons, including self-defense against herbivores that would eat it. Unfortunately, they cause phytophotodermatitis in people, leading to itching, burning, painful blisters within a day or two, and long-lasting, often-pigmented, scars that can last for many years.

The parent compound of the furocoumarins is psoralen. It is present in the common fig, celery, parsley, and all citrus fruits at concentrations that are perfectly safe to eat (although celery packers can develop skin photosensitivity). It is used to sensitize a patient’s skin for PUVA (psoralen + UVA) treatment for psoriasis, eczema, vitiligo, and cutaneous T-cell lymphoma. However, it is the linear derivatives of the parent compound that are the problem when someone comes into contact with giant hogweed.

The entirely natural chemicals enter the nucleus of skin cells where they bond with DNA killing the cells. The chemical structure of the compounds also makes them act like an anti-sunscreen, absorbing sunlight and transferring energy to the skin causing dam. The body’s defence to this process is to produce the brown “tanning” pigment melanin at high levels in the skin cells around the damage leading to dark coloured scars.

It’s best not to come into contact with giant hogweed, but if you do, then it is advisable to wash the affected area as soon as possible with soap and water and then to cover it up and avoid sun exposure for several days. If the itching becomes a serious problem and blistering begins to occur, seek the advice of your doctor urgently. 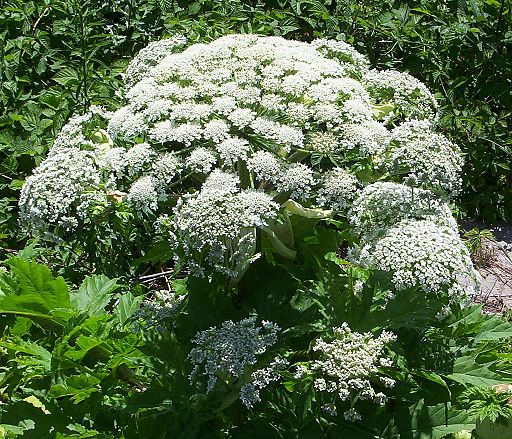